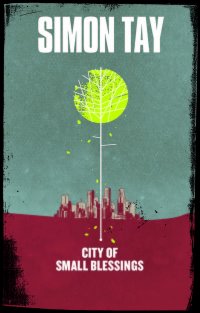 In this poetic but tranquil collision, the City of Small Blessings brings together a father and a son, two disparate elements of Singapore society – the greying population and its cosmopolitan youths – to question the common loss of home in the young city-state of Singapore.

Bryan is a retired school principal who recently returned home after a failed migration to Canada, where his only son, Peter, immigrated to a few years ago. Together with his wife, Bryan rents a house in an old airbase in the north of Singapore when it is announced that the area is to be redeveloped and the house repossessed. In a way, this mirrors Singapore’s plans for its former Seletar airbase where author Simon Tay and his family are currently renting a colonial house. While this was part inspiration for the book, unlike Bryan, Tay’s house is not facing demolition.

The book follows Bryan’s vain attempts to save his home and the neighbourhood from the wrecking ball. He rallies his neighbours, going about the official channels of protest: writing letters to the newspapers, government agencies, MPs and organising events to attract the public’s attention, but in typical Singapore fashion, to no avail. Desperate, Bryan even personally appeals to his former students who have rose to the highest echelons of the public service for help – Tay’s subtle hint to the lengths one must take for the ordinary man to be heard in Singapore.

And the beauty of this book lies in such questions and issues about the values of Singapore that Tay hints at throughout the book as he collides people, places and time: Bryan and Peter, Canada and Singapore, a father’s history and a son’s future. While the theme of preservation versus progress dominates the book, it is really life in the city and the little things that Tay details, like a neighbour explaining why the government did not allow her to keep cat as pets and how Bryan felt when he stopped receiving invites from the Prime Minister’s Office to attend National Day Parades after retirement, that we get a sense of why people struggle to find a home in this city.

This collision comes out best in the prose as Tay breaks away from linear story-telling and the book not only shuffles between perspectives of father and son, but also time, as we are brought through the back story of a father’s friendship with a Japanese soldier during World War II and the uncertain future that this city holds for Bryan and Peter.

While the book would have easily became a retiree’s rants against the merciless tide of progression here, “This is a story of a city I do not know”, Tay shows restraint and even introduces a new victim in Peter, the cosmopolitan youth who feels estranged from his birth place, “This used to be a home, our home. Now it is just real estate.” It is here where one can feel Tay speak. The 47-year-old has after all spent considerable time overseas with the Singapore International Foundation and as the current chairman of the Singapore Institute of International Affairs. And it is through a father-son conversation about alienation that we are brought through the jittery psyche of the young and elderly Singaporean as they try to make sense of where is home.

Thus, one wonders if the book was inspired by Tay’s background. His late father, Tay Seow Huah, was formerly a permanent secretary in the public service while Tay, a law lecturer today, represents a generation of young Singaporeans that can comfortably jet set from city to city.

But this book suffers from Tay’s restraint too. Bryan is never angry but always measured, riding away from his problems on his bicycle, taking the reader on a ride but never going fast enough. And as it marches to its ending, the sophistication and subtlety in Tay’s earlier prose gives way to a burst of didactics as if fearful that the reader might have taken this as a mere leisure ride.

But it is not. While Tay maintains that this book is “not autobiography nor a political tirade”, it does continue the themes of alienation from home that have ran through his two earlier books — Stand Alone (1991) was his first novel of 12 short stories and three poems about Singapore that he wrote during his 1½ year travels in Europe and South America, while Alien Asian (1997) was an account of his time in America as a foreigner. Instead, Tay hopes the book, first written some 12 years ago, remains art that will allows us to survive the truth as Nietzsche once said, an optimism that makes his Singapore, truly, a city of small blessings.

A review I wrote for my assignment in COM419A:Arts and Cultural Reporting