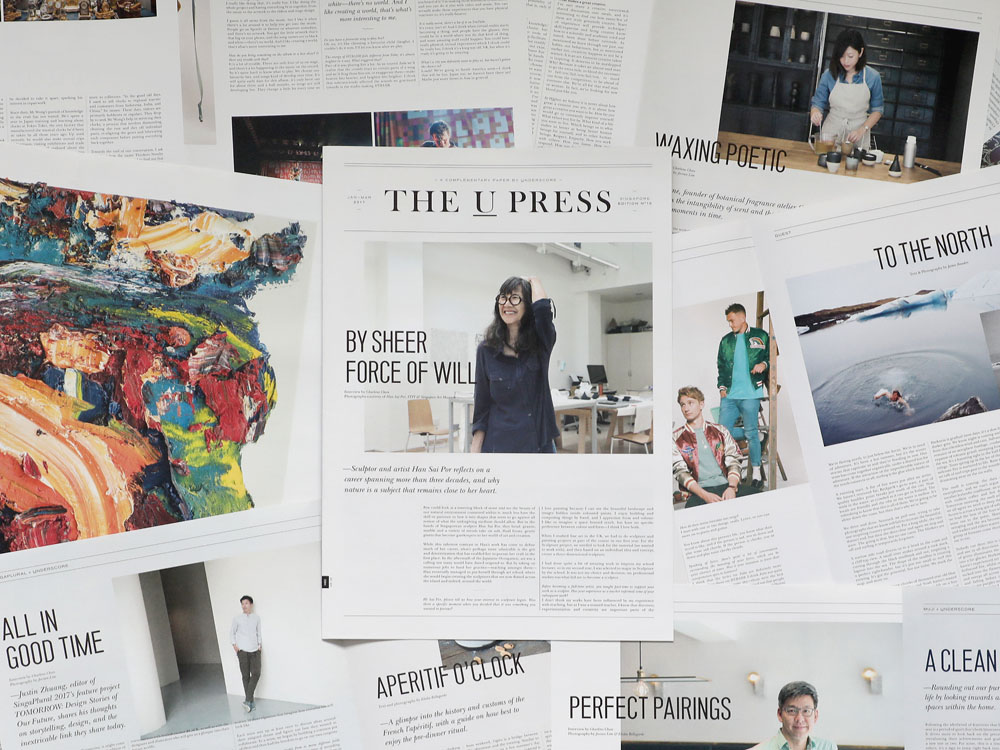 Many would have recognized, but few actually seen IRL (in real life) the works displayed in I Have A Room With Everything Too. This recent exhibition at The Substation Gallery (2-12 July) showcased over a hundred books, magazines, and printed ephemera by design studios around the world—offering a rare opportunity to appreciate avant-garde graphic design outside the digital screen. Instead of viewing endless studio shots on infinite scroll and click thumbs up, graphic design aficionados could actually pick up design and flip, stroke, or even smell.

An annual report retold as a travel diary by Singapore design duo Couple, an art catalogue with a cover made from amusement park tickets by Indonesian studio Artnivora, and a calendar resembling a miniature pallet of printed sheets by Hong Kong based Co.Design were part of a line-up of eclectic projects assembled by curator Yanda Tan. Laid out across a single row of makeshift tables spanning the 23-metres long gallery were the mostly arts and cultural projects Tan had acquired from bookstores and designers via his art and design blog THEARTISTANDHISMODEL and recent travels to other cities.

The collection is a diverse portfolio of graphic design production possibilities which reminded visitors of “the joy of holding something tangible in our hands that took hours, days, months to put together.” But this worked only up to a point. There was little context besides the name of the designer and their city of origin in order for visitors to appreciate the works beyond design as a process of production. This was particularly telling for the foreign language publications whose contents were indecipherable, rendering them no different from a mockup by printers. Even as many of the works wowed with their cool surfaces and exteriors, the lack of details on production processes or a nod to the printers meant how the designs were created remained a mystery unless the curator was on hold to conduct a walk-through. For instance, Yoshie Watanabe’s One Plus One Crossing book is an intriguing flip book of die-cut pages, but what makes it even more impressive is it was actually a packaging designed in 2006 to hold the story behind an engagement or wedding ring.

As the exhibition title suggests, the showcase is the personal inspiration library of Tan who runs the creative studio DO NOT DESIGN. The self-taught designer has clearly studied his materials well, as seen in his works which also feature in the showcase. The elaborate cut-out cover of his latest DEAR magazine and the hand-scrawled marks plus torn edges of his album design for Monster Cat both echo Tan’s obsession for the materiality of design—an aspect that the exhibition rightly points out isn’t always evident in a time where the digital image is our most common encounter of graphic design. I Have A Room With Everything Too presents graphic design in third-dimension, but still keeps it on a pedestal that is to be appreciated as an objet, rather than a material we encounter in our everyday lives.

Visitors may have felt déjà vu at the exhibition for another reason. In 2011, Tan held the first edition of a similar exhibition featuring several of the same works, such as Theseus Chan’s WERK magazines and Stefan Sagmeister’s 1998 album design for song-writer Jamie Block. Back then, Tans’ exhibition was larger and even had a day of presentations by designers. This time around there was a printed supplement featuring question-and-answer interview with designers, as well as personal essays by lovers of print.

Without the shock of the new from four years ago, I Have A Room With Everything Too was less fresh, but still a welcome relief in a city where exhibitions on graphic design remain few and far between.