This article is in response to “Criticizing Criticism: Too Little and Too Much,” by Steven Heller, which originally ran in AIGA’s The Journal in 1993 (vol. 11, no. 4). It’s part of a series in which we invite a new generation of design critics to page through our archives and respond to an unresolved design issue.

As a then journalism student who dabbled with Photoshop and InDesign in my spare time, I was sold. Instead of switching careers to become a graphic designer, I could write about it instead. No one told me what Poynor and Heller did were examples of design criticism, but how they dug into what looked cool to reveal connections to history, society, and culture, opened my eyes. The only problem? I was in Singapore, where there was no specialized graphic design magazine. But through a stroke of luck, I met a group of local graphic designers eager to create one. The bi-annual journal never made me much money, but it kept my interest in writing about graphic design afloat.

Fast forward eight years, and I’m about to graduate from the School of Visual Arts’ Design Criticism program co-founded by Heller and Alice Twemlow. I even had a workshop with Poynor last year. I should be ready to produce graphic design criticism—but what does that really mean today? 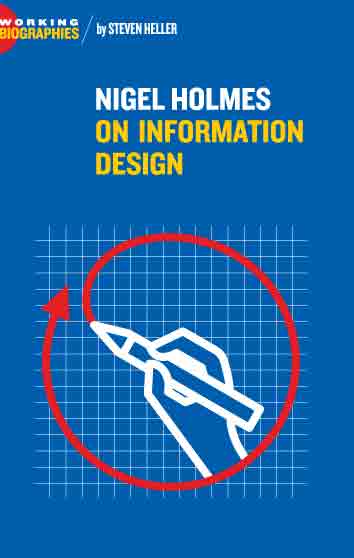 I was browsing Basheer when I chanced upon Steven Heller’s working biography with Nigel Homes, the former Graphics Director of Time Magazine for just $10!

Not only was it a bargain, it was am enlightening and a breeze to read. Set in a question-and-answer format, Nigel takes Steven and the reader through his thoughts about how he got to do what he was doing, what information design is all about and how he does his work.

A trademark in Nigel’s work is a touch of wit and light-heartedness with “metaphoric” elements that some critics would say distract readers from the information graphic. But Nigel defends his approach:

“A good approach to information graphics includes an appeal to the reader, immediately followed by a true account of the story… I want to make room for enjoyment, delight, aesthetic appreciation and wit, and a friendly “you can understand this” approach.”

Published in 2006, Nigel Holmes: On Information Design, is a great book to find out what goes behind the thinking of this “explanation designer” (as he would like to called). In the spirit of his work, Nigel has even drew a graphic about what it takes to be an information designer: