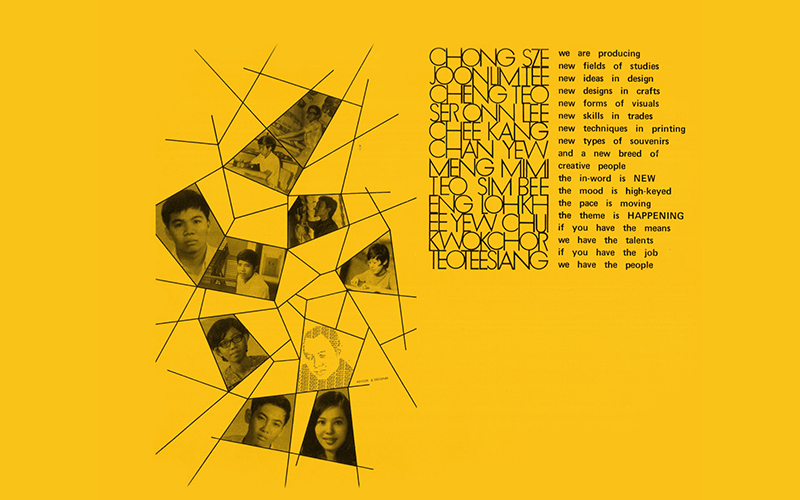 The now-defunct Baharuddin Vocational Institute was Singapore’s first formal school for design. Justin Zhuang looks at how the institute laid the foundation for the design industry here.

Graphic design has traditionally been dismissed as “surface”, a subject more concerned with aesthetics more than anything else. Thus, a part of contemporary design education is often devoted to studying the profession’s history and theories to prove its deep connections with the world we live in. “A *New* Program for Graphic Design” by designer David Reinfurt (2019) is a “textbook” that sets out to do just that. Based on a series of three courses originally developed to teach graphic design to liberal arts students at Princeton University, Reinfurt takes us on an alternative path from graphic design as a commercial art to view it as an “interface” where various disciplines meet. He holds up the likes of printer-publisher Benjamin Franklin and designers Bruno Munari, Lazlo Moholy-Nagy and Muriel Cooper, to show how graphic design has also historically been produced at where it meets with printing, photography, art, mathematics, computing and engineering. Abandoning the authoritative air of traditional texts for education, Reinfurt invites students to explore the network of rabbit holes he has personally dug— and to arrive at their own conclusions on what graphic design has become.

What is graphic design history for? It is a perennial question I encounter with my students—typically written on their bored faces (Or maybe it’s me?). I’ve never heard a leading design practice discuss history except for theirs, nor one that has clinched a client because of it. This existential question was one of many that led to the 2014 conference: “Graphic Design: History and Practice” in the Free University of Bozen-Bolano in Italy. The 6 presentations and 2 post-discussions, as well as 3 additional reflections, compiled in this book offers a small but valuable inquiry into the role of graphic design history in contemporary times. Whether it is uncovering the role of women, harnessing the digital wave or rethinking its place in design education, there is much to look forward to for those interested in its past.